CRANE moves to Endeavour Press get a FREE ebook!

I am totally blown away by the news that Endeavour Press, the UK's leading publisher of digital books are publishing the Sgt Major Crane series. To celebrate,the first book in the series Steps to Heaven is free through to Saturday 22nd February. Just click on the cover!

Meet Sergeant Major Crane. A Special Investigations Branch Detective in the British Army, he is the soldier who polices other soldiers. He thinks he has seen every crime known to both war and peace. But nothing has prepared him for the case of Solomon. An Afghanistan veteran he has murdered his wife and six year old son and then committed suicide. Soon there are similar horrific murders around the country. Crane knows there must be a connection. But what?

Crane starts to investigate the local Church Solomon was attending. But with the body count rising, events start to take a darker turn … could the Church be the connection? Is the Church offering salvation? Or is it forcing people to take the first,untimely Steps to Heaven?

'Steps To Heaven' is an edge-of-the-seat crime thriller that is perfect for fans of Lee Child and Peter James.

The second, 40 Days 40 Nights has just been released.....so if you enjoy Steps to Heaven, make sure you buy the second book in the series. 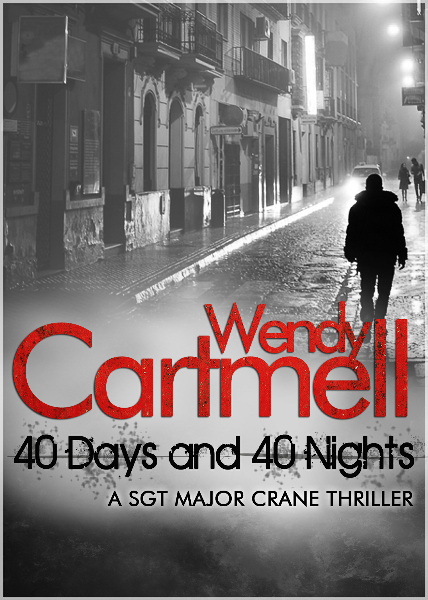 Just click on the cover to buy at Amazon!

Summer 2012. Aldershot Garrison has been overrun by Team GB as they make their final preparations for the Olympic Games. Tasked with babysitting the athletes for the duration of their stay, Sergeant Major Crane has braced himself for an uneventful few weeks. But when the body of a soldier is discovered and supplies start disappearing from the garrison, Crane knows that something sinister is afoot. As a faceless evil infiltrates the Army barracks, Crane sets out to investigate. But what is the connection between these seemingly unrelated events? Can Crane find the source of the looming threat? And can he do it before his 40 days and 40 nights are up?

Oops, you forgot something.

The words you entered did not match the given text. Please try again.